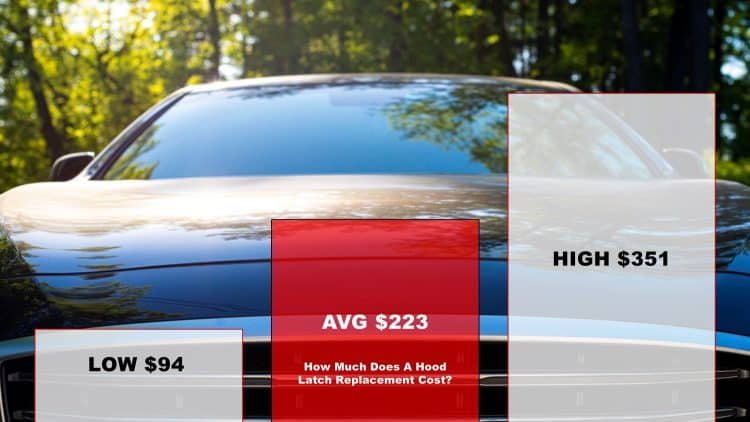 The average cost of a hood latch replacement is $223. Costs vary from $94 to $351 depending on the make and model of the vehicle for the US in 2019 according to YourMechanic.

What The Hood Latch Does

The hood of your vehicle needs to stay open ensuring access is east to the engine and all the components of your vehicle. Obviously, it has to be secured while you drive to prevent it from opening and crashing into the windshield. The purpose of the hood latch is to keep the hood closed. Usually, it consists of a hook and eye style assembly. A latch is operated via a cable from the front of the vehicle, passing through the firewall and then attaching to the rear of the hood release/lever, usually located beneath the steering wheel of the vehicle. Once the hood is closed, the latch slides over the catch of the hood and a spring snaps it closed. When releasing the hood, the release cable is pulled. In turn, that opens the latch and it pops up past the hood catch. There is also a secondary safety catch on the hood latch that needs to be fully pressed to open the hood. If the hood latch is broken or seizing, the hood will not allow the latch to close or will not open at all.

As a good rule of thumb. it is usually prudent to replace the entire latch assembly. One component will be on the hood and the other on the inside of the vehicles front end. Sometimes, depending on the model and make of your car, replacing the hood latch can be a complex process as it is vital both parts are lined up correctly. it really is a job for a professional.

It is vitally important to replace a hood latch that is damaged. Although it will not damage your engine driving without an operable latch is incredibly dangerous if the hood will not secure properly. Even if it closed but inoperable you still have to be able to access the engine for regular maintenance and other repair services.

Impact Auto Body offers auto body repair services. We want to save you time and, more importantly, money on the repair of your vehicle. Our fully qualified and experienced service technicians deliver first-rate service when you need it. For an auto repair company, you can trust. Call Impact Auto Body to receive a free repair estimate today!